For the very first African filmmakers, cinema was among other things a means to awaken the collective memory of the history of the African continent. As modern griots, storytellers, they challenged colonial stereotypes and transformed authentic stories and myths into images. In doing so, they aimed to communicate the fundamental values of Africa to today’s generation and those of the future. Their central objective is the mental decolonisation of the audience. In this spirit, our programme intends to direct attention to Africa and its roots, in order to reconcile Africans with themselves and the rest of the world. African films still fall short of reaching a mass audience. They are however characterised by their own distinct aesthetics, which draw inspiration from the collective memories of largely unknown peoples, exposing them to a wider audience. Director Gaston Kaboré sums it up in the following manner: “Our films represent small fragments in the reconquest of ourselves.” This artistic approach made African cinema famous the world over.

An abandoned sports complex in Lubumbashi (named Elisabethville until 1960) that used to belong the mining company Gécamines, layered with sound archives, images and ghosts of the past. The weight of the place’s colonial history is met by an intimate family story: a letter from the late independence leader Lumumba to his wife. This juxtaposition opens a view into the collective memory of the former Belgian colony.

END_OF_DOCUMENT_TOKEN_TO_BE_REPLACED

No Archive Can Restore You

The former Nigerian Film Unit building was one of the first self-directed outposts of the British visual propaganda engine, the Colonial Film Unit, stands empty on Ikoyi Road, Lagos, in the shadow of today’s Nigerian Film Corporation building. This is an exploration into the ‘sonic shadows’ that colonial moving images continue to generate.

END_OF_DOCUMENT_TOKEN_TO_BE_REPLACED

Steel, rust, stone and chalk. Image upon image, a green cloud creeps through this reddish brown mining animation. The soils of the DR Congo are rich in raw materials, their extraction drives people relentlessly forward, like a machine. But the profits are collected by others, yesterday and today.

END_OF_DOCUMENT_TOKEN_TO_BE_REPLACED 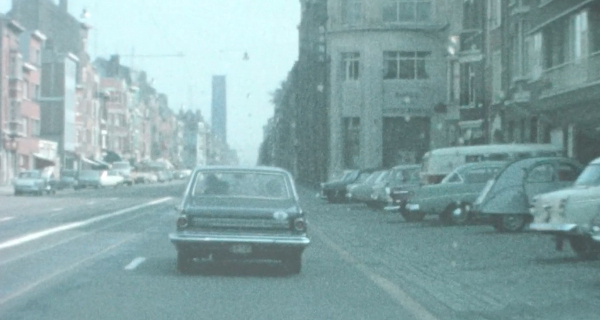 The Yellow Mazda and His Holiness

The question of what it would mean to start a film with a black image, develops into a subtle personal essay about the filmmaker’s parents. The story of a Belgian missionary falling in love with a Rwandese girl, blends with what images and colonial history mean to their daughter.

END_OF_DOCUMENT_TOKEN_TO_BE_REPLACED

When I Grow Up I Want to Be a Black Man

A double-screen work on violence and freedom. The ‘alphabet of violence’ stands next to the vision of the potential, possibility, aspirations and ambitions of a future where the value of the Black man in society is revitalised through a lexicon of freedom.

END_OF_DOCUMENT_TOKEN_TO_BE_REPLACED

Dakar, a few days before the feast of Tabaski, a painter is shut away in his studio, working on the theme of the ritual sacrifice of the ram. The red paint drips from the sketches hanging on clotheslines. An inscription on the wall: "Tabaski, who's next?". Three characters and a sheep revolve around him and reconnect him with reality.