Otto Banovits' short film Dark Chamber is based on the true event when 71 illegal refugees tragically died trapped in the back of a truck by a border crossing somewhere in Europe. It does not specify the exact location as nowadays these events do take place almost weekly. Therefore, it states, somewhere in Europe.... The work is a on the borderline between being a traditional film and a installation piece. The film is using the concept of Camera Obscura in order to create an in-direct representation of the event.

The video installation can be seen from Thursday Nov 22 until Sunday Nov 25 between 6 and 8pm every 15m starting on the hour in a container in front of the Roter Salon at the Volksbühne on Rosa-Luxemburg Platz.

My initial idea has been to use an in-direct cinematic representation in order to communicate the otherwise uncommunicatable. As a filmmaker I tried to apply the visual language that cinema possesses by not showing anything explicitly but on the contrary to rather offer suggestions. My motivation was to talk about this global issue of emigration that we are collectively facing, however as the topic being very fresh and sensitive, I had to find the „how to“ in order to communicate the truth. I question the statement that: „Art can do anything as long as art does not do anything“. In my opinion, it is our duty to address these questions and use art to offer the spectator a more intimate and deeper insight into the problem. The film, through its simplicity and length offers a space for perspective and reflection. Playing with the angles from where/how we see this issue from - suggesting that it is all a matter of a subjective perspective how we see things - most importantly how we Europeans react to this very current and real issue. For me cinema is a non-dialogue medium. Therefore I am using merely the soundscape and the Mise-en-Scene to send my message across. I believe that the best showcase of the work is to screen the film in a container. Where a projector is replicating the idea of the camera obscura. The container should have the exact measurements of a 7.5 ton truck in which the refugees were found. The spectators need to enter the space and watch the film in there thus, physically re-living and re-creating a similar experience as for the people who died... 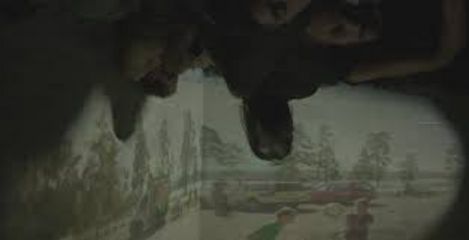